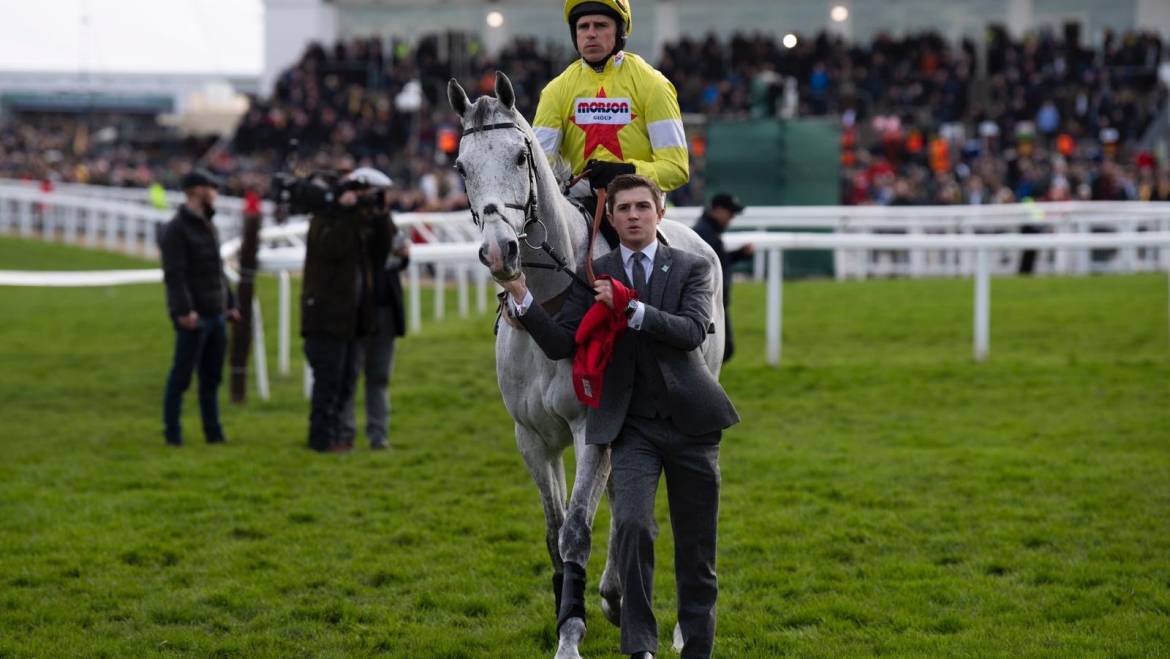 After an outstanding start to the season with 8 winners at Chepstow’s season opener last weekend we caught up with Harry Derham, Assistant Trainer to 11 times Champion Trainer Paul Nicholls as he previews the National Hunt season and gives us the plans for the Ditcheat Stable Stars.

It must have been a challenging time for the team with the Covid-19 outbreak and lockdown period. How have the restrictions affected your training and preparation for this season?

It was obviously an extremely frustrating end to last season with it being cut short. We normally target April as a month where we have a lot of runners and a lot of the horses had big targets so that was very frustrating. When lockdown happened and the season came to end it was then a case of winding the horses down slowly because we couldn’t turn them out into the field straight away in March and April as we didn’t have enough grass and it would have been too cold. We kept all of the staff in work, we didn’t furlough anyone and did the best we could under the circumstances in keeping everyone safe and looking after 140 horses.

The horses then came back into training at the beginning of July, two weeks earlier than normal as their summer started earlier but all of the preparation has been exactly the same as usual for the horses. In terms of plans for the season, whilst they had to make adjustments to the race programme in the summer it is back to normal now so we are able to train the horses with the same race programme in mind.

The team have started the season in flying form. What was your most eye-catching performance at Chepstow’s season opener?

I’m actually going to say a horse who got beaten called Bravesmansgame. The race wasn’t run to suit him at all, they went quite slowly, and he got beaten by a what I’d imagine is quite a smart horse. Harry Cobden liked what he felt, the last bit of the race was his best bit, and he showed a lot of promise. He’s certainly a horse to follow for the remainder of this season and beyond, I think he’s going to be a really exciting horse.

McFabluous was very impressive last Saturday at Chepstow. What are the plans for him for the season?

We’ve always thought the world of him, he’s a very smart horse. We spent the summer hoping he might develop into a Stayer’s Hurdle horse and if that was ever going to happen, he had to go to Chepstow and win like he did. He jumped fantastically well and beat the field very comfortably which as I say, if he’s going to be a Stayer’s Hurdle horse he needed too. We’re going to go to Newbury now for the Grade 2 Long Distance Hurdle on the Ladbroke Trophy weekend, which will be in open company, it’s an established Stayer’s Hurdle trial so that will tell us whether we’re doing the right thing aiming for the Stayer’s Hurdle at Cheltenham in March, but we think he’s a very smart horse. He relaxes very well in his races which is important for staying hurdles and I’d like to think there will be an awful lot more to come from him.

Cyrname finished last season as the joint highest rated horse after his impressive defeat of Altior. What are the plans for him for the season?

As we speak its slightly up in the air! The plan all summer was to go to Down Royal (Ireland) in two weeks’ time however obviously with travel restrictions at the moment it could be a bit of a logistical nightmare if it happens. If he doesn’t go there however, I’m not certain where he will go. There’s a chance he could go to Ascot and carry top weight in a handicap and there’s other options we could look at but if we’re not able to run him in the Grade 1 at Down Royal he’s not the easiest horse to place because of his rating. The ideal plan was to go to Down Royal in good form and to find out whether he truly stays 3 miles because Kempton was inconclusive in the sense that Harry said that he wasn’t at his best from a very early stage and that was the only time he tried 3 miles. So, we’re keen to go to Down Royal, find out whether he stays and then you plan the season after that but right now its still a little bit up in the air and travel dependent.

And Clan Des Obeaux, will he be heading back to Kempton to defend his King George crown for a 3rd time?

He will indeed. He’s going to go to the Betfair Chase at Haydock on the way. He finished 4th in the race two years ago and Paul is very very pleased with him at the moment. It’s sometimes easy to forget as he’s been around for a while but he’s actually only an 8-year-old and he looks fantastic at the moment. He’ll go to Haydock very ready to do himself justice with the plan of going back to Kempton for the King George on Boxing Day. He obviously doesn’t like Cheltenham so I’d be shocked if we ever went back there again but the first half of his season will certainly evolve around Kempton.

You must be looking forward to getting Top Of The Game back to the track after his injury last year. What are the plans for him for the season?

Can’t wait! The plan ever since he picked up his injury last year has been The Ladbroke Trophy at Newbury (formerly the Hennessey) and it still is. We take it very much day by day with him, he’s not the easiest horse to get right so Paul has to go gently with him. I would imagine he’ll have a racecourse gallop before Newbury. He looks really well at home and he’s doing everything well so all roads lead to The Ladbroke Trophy. The obvious dream/target is The Cheltenham Gold Cup in March but his run at Newbury will tell us whether that’s where we’re aiming. He’s obviously a very very high-class horse but it’s just about getting him there in condition, that’s the most challenging thing.

What horse are you personally most looking forward to seeing run this season?

That’s actually a really difficult question because there are a lot of horses that I’m really excited about. One that’s a little more left field, I’m going to go with a horse called Saint Sonnet. The reason being he had two runs for us last season, he won at Catterick in a relatively moderate race but won impressively, then was 7th in the Marsh Novices Chase at Cheltenham which was a very very good race. I was impressed with that performance because he came to us at a very difficult time of the year in the sense that when you get horses in the middle of the season its often difficult to get them to perform well and he did. He’s since had a great summer, he looks really well and we’re probably going to go for The Paddy Power Gold Cup in November at Cheltenham and it wouldn’t surprise me if he ended up being a graded class horse after that and he’s a young chaser we’re really looking forward to.

Do you set yourself targets as a team for the season? With Paul having trained over 3000 winners, 125 Grade 1’s and having been crowned Champion National Hunt Trainer an impressive 11 times, do you set out at the start of the season with specific targets you hope to achieve?

I don’t have any doubt that the unspoken target in Ditcheat is to be Champion Trainer. When we are training a lot of good horses and fortunate to have the numbers of horses we do, then why wouldn’t you aspire to be Champion Trainer. I always have in my mind that a baseline for an excellent season is for us to achieve £2 million in prize money and 100 winners. With last season being cut short it was the first season in a very long time that we hadn’t reached 100 winners, finishing on 94 winners when the Covid outbreak brought the season to an early end. We always target to have top class horses in the big races and we always try to maximise the ability of every horse that is in training with us but I know Paul will have an eye on his 12th trainers championship!

You mention the ambition of another Trainer’s Championship for Team Ditcheat but there’s also been a lot of talk of the Jump Jockey’s Championship being very open this year. What do you think of your stable jockey Harry Cobden’s chance of becoming Champion Jockey?

I’m actually quite optimistic about it to be honest. This season is going to be different to others. Where a lot of jockeys often tend to get a lead through the summer when Harry isn’t always as busy as we only ever have a small summer team, this year was very different, there wasn’t as much racing through the summer with the Covid break and Harry is very much in contention at this early stage in the season. Like any season with a jockey you need a bit of luck on your side, you don’t want a month injury or anything like that but he’s riding as well as anyone at the moment and there’s absolutely no doubt that he’s got a really big chance this season of being Champion Jockey. Paul will certainly be supporting Harry in it and with Harry’s agent in Dave Robert’s if he gets the bit between his teeth there’s no one better in supporting you to become Champion.

Finally give us Harry’s dark horse to follow for the season.

I’m going to give myself two chances!

Firstly, a horse called Whiskey Lullaby. She finished second in an Irish point to point and then she joined us and finished second in a decent Newbury Mares Bumper, which was a really nice run. She’s a very good jumper, I think she stays well and she’s a straight forward mare who I think will do well this season.

And secondly, a dark horse for the season, is a horse called Tamroc Du Mathan. The reason I’ve chosen him is that he hasn’t jumped fences in public yet but his schooling has been absolutely brilliant, I’ve always looked forward to him jumping fences and on a bit of nice ground and a flat track he will definitely be well up to winning some novice chases so he could certainly be worth following this year.